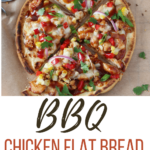 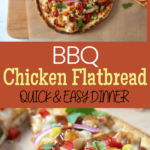 BBQ Chicken Flatbread is loaded with many of my favorite ingredients: sweet and tangy BBQ sauce, tender chicken, crisp vegetables and my favorite flavor of all, cilantro!

Flatbread as the crust

The flatbread makes having pizza night super simple and everyone can make their own exactly the way they are craving.

We love a thin crust pizza and flatbread gives the feeling of a crisp crust that cooks in just 15 minutes.

What you will need:

How to make BBQ Chicken Flatbread

In a skillet, add 1 tbsp Olive Oil. When the oil is hot, add the chicken. Season with salt and pepper and cook until the pink is gone. Place chicken on a cutting board and run a knife through to make very small pieces.

Place one cob of corn in microwave for 2 minutes. When cool, cut the corn off the cob. It’s fine to use can or frozen corn too.

Prep the red and green onion, and red bell pepper.

Grate mozzarella cheese. I prefer to grate my own cheese so that you can get a few bigger chunks on each pizza.

Cover each flatbread with a thin layer of bbq sauce. I also add a little sauce to the chicken before adding it to the flatbread. We like it saucy!

Add the desired amount of each topping to each flatbread.

Bake in the oven for 15 – 18 minutes or until cheese is melted and bubbly.

Garnish with green onion and cilantro. I can’t get enough of the fresh flavor of cilantro. If it’s not your thing, you might try some fresh parsley to add a little freshness. 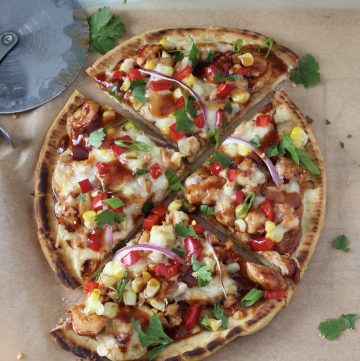 This recipe is delicious with as few or as many ingredients as you would like to add.

Reheat in the microwave. Don’t worry! The crust keeps its crunch. Or, place in a 350 degree oven until the cheese is melted.

Hi, my name is Jill!  Thanks for stopping by.  Here you will find recipes that have been inspired by friendship, family and my love for good food.   Read More…

Subscribe to get NEW RECIPES delivered straight to your inbox… FREE!!!